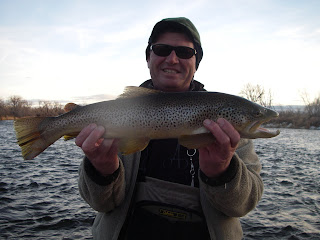 Tom Fenger with a Bighorn Brown

Randy Berry, Tom Fenger, and Brian Berry caught and released 523 trout in 2 1/2 days of fishing on the Bighorn River of Montana. Now I know that most of you are saying that is a big lie right now, but believe it or not, it is true. On February 14th the three of us fished the Bighorn for the first time in several years. We had taken trips to the river every year for more than a decade, but had lost interest in the water and looked for other winter fishing locations. Thankfully we returned.

As we fished we would rotate fishing and rowing. Our system works where once a fisherman lands three fish he switches positions with the angler rowing. This way everyone gets an equal amount of time fishing and rowing. We like to call it baseball. Many of our switches on this particular trip were made after the fisherman had only made 5 to 10 casts because he had already landed his three fish. We switched constantly.

The first day we floated from the Dam to Bighorn, 13 miles in total. We were the only boat on the river that day and we only saw a very few waders. It was great. The weather was a little cold, around 35 degrees with a wind of about 15 to 20 MPH. We fished only streamers, as we did all three days of fishing and never got out of the boat, except for lunch. Our fish counts the first day were astonishing. At the Three Mile access, we had counted 77 fish. We were very happy with our morning, we knew we had 100 fish in the bag, (100 fish is our goal every day). The day ended with 155 fish caught and released. We did not think that we could top it the next day, we were wrong.

The second day we got to the boat ramp a little earlier, around 8:00 am. We tried to fish the water that was productive the day before and skip over the water that was not. When we got to lunch at Three Mile we had landed 117 fish! Now we had the number 200 in our sights. We were on a mission and were dedicated to fishing hard the rest of the day. We ate and got right back out to catch them. With the light leaving and the temperature falling rapidly we settled on 226 fish about a mile above the take out and rowed in. This was a record high number of fish for all three of us. And when I say that, it means something. Randy has been guiding for over 50 years and Tom for over 30! That is a lot of fishing and guiding. We were on cloud 9 as we ate dinner and sat around our cabin congratulating ourselves.

With all these fish, we decided to only fish from the Dam to Three Mile the last day, and drive home. The day was perfect. More clouds than the first two days and fish were as active as ever. We ended our trip with 144 fish at 1:00.