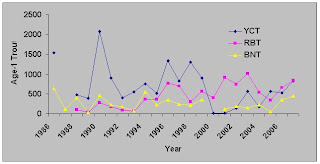 “I wanted to get an update out for folks on the population estimates in the South Fork based on our October electrofishing efforts. By and large, it was good news. We saw an overall increase in the cutthroat population and a big jump in our yearling estimate. Brown trout and rainbow trout were also up from last year. Combined, we’re looking at some of the highest overall trout densities we’ve ever seen (about 4,500 fish/mile).”

This figure of yearling abundance shows good yearling survival of all species in the past two years. 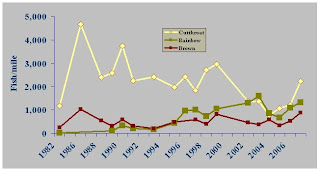 And this is age-1 and older densities

This confirms what we have noticed the past few years on the South Fork. We have seen a large jump in the number of juvenile trout, especially on the lower sections of the river.

Check out the link to our site that details info for each species.